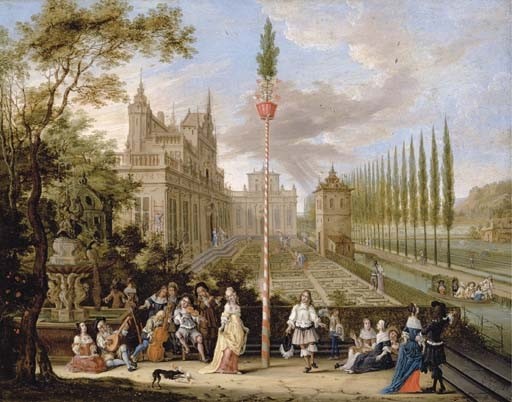 By the early-to-mid-17th century, the Maypole was a common fixture of May Day holiday gatherings. Unlike the later family Christmas tree, which came to secular use in England, the Maypole was a unique emblem of tradition for that community and was used outside, rather than inside the home. From parts of England, Scotland, and Wales, to across the channel and the Low Countries and other places, it was common for whole communities to gather for the vibrant partying that would often encircle the decorated pole, which was adorned with flowers, greenery, cloth ribbons or various chosen décor. The pole length varied from 20 feet to over 100 feet, depending upon those making the decisions for the community. When the tree was cut, processed, then raised in a prominent place, children and adults would see that as a signal that grand merry making would be taking place the next day.

It was quite an affair around the pole. Musicians played their horns, drums, bagpipes, or any instrument found in the community. People would most commonly dance and sing around the pole, typically holding hands and moving together as a rhythmic rotating mass, but also with other orchestrated dances within the scope of skills of the attendees and organizers. There were all kinds of festivities, ceremonies, and competitions – with plenty of food and beer.

Local leaders understood “making merry” with the Maypole was good for the community. How did the pole and merry making occur in the early Virginia colony? Well, we’re not entirely sure. During the early years of death and futility, from 1607 to 1614, merry making was not big on the list of events. After Sir Thomas Dale and Reverend Alexander Whitaker arrived in 1611, a stricter form of religious observances was put into law through Dale’s departure in 1616, with less-secular traditions being carried out – for Dale was a religious reformer and evangelical in many ways. Following the first general assembly of 1619 and Virginia becoming a closer version of its normal self, most likely the Maypole made its spring appearance from settlement to settlement. The first and best depiction put to paint and canvas is the 1627 work of artist Peter Breughel the Younger who wanted to show this small community frolicking around the Maypole. It has a little bit of everything as to what that festivity would look like, including the simple décor of the pole. In the second depiction, artist Pieter Gijsels showed the merry making of a private Maypole oriented festivity in the mid-to-late 17th century. It shows a beautifully decorated pole, smaller than the community one depicted by Breughel. People with money and higher social status often threw their own Maypole frolics on their own property.

These two artworks provide a good comparison of 17th-century Maypoles and the types of activities conducted in that period.