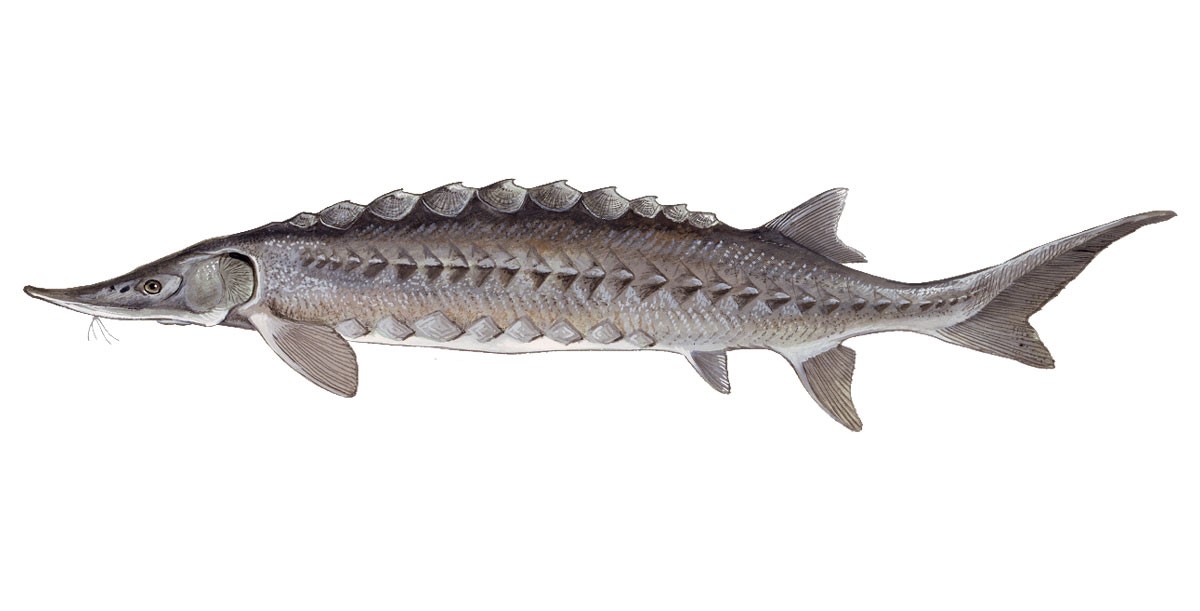 Four hundred years ago, the James River was a reliable source of food for those who settled along its banks. Many creatures can be found above and below the water’s surface, including oysters, freshwater mussels, turtles, waterfowl, fish and. . .living dinosaurs!

The sturgeon –sometimes referred to as a living dinosaur—is an ancient species of fish that has been around for about 120 million years. Like some dinosaurs, their bodies are covered by thick bony plates called scutes. To date, the largest recorded Atlantic sturgeon was a whopping 14 feet long and 800 pounds. However, most adult sturgeon are only about 5-10 feet long and weigh a modest 65-200 pounds. Sturgeon typically live in the ocean, but during the months of April-June they return to the freshwater rivers where they were born to spawn. Young sturgeon may lurk in the river of their birth for up to six years before swimming out to sea.

While the English colonists saw many new and unfamiliar creatures in Virginia, sturgeon was a food source that they were already acquainted with. In A Map of Virginia (1612), John Smith wrote about the abundance of sturgeon that he observed in the tributaries of the Chesapeake Bay:

“In somer no place affordeth more plentie of Sturgeon, nor in winter more abundance of fowle, especially in the time of frost. There was once taken 52 Sturgeons at a draught, at another draught 68. From the later end of May till the end of June are taken few, but yong Sturgeons of 2 foot or a yard long. From thence till the midst of September, them of 2 or three yards long and fewe others. And in 4 or 5 houres with one nette were ordinarily taken 7 or 8: often more, seldome lesse.”

“Sturgeon which was last sent came ill conditioned, not being well boiled. If it were cut in small pieces, and powd’red, put up in cask, the heads pickled by themselves, and sent hither, it would do better. Roes of the said sturgeon make caviary according to the instructions formerly given. Sounds [air bladders] of the said sturgeon will make isinglass, according to the same instructions. Isinglass* is worth here ₤6 13s 4d per 100 pounds, and caviary well conditioned is worth ₤40 per 100 pounds.”

*Isinglass is a gelatin-like substance that can be used to make glue or jellies, or to clarify beer.

Sturgeon remained such an important food source for the English colonists, that in 1611 Sir Thomas Dale enforced harsh punishments for fishermen or sturgeon-dressers (those who prepared the fish for consumption) who dared to cheat customers or colonial authorities out of the product that they were owed: