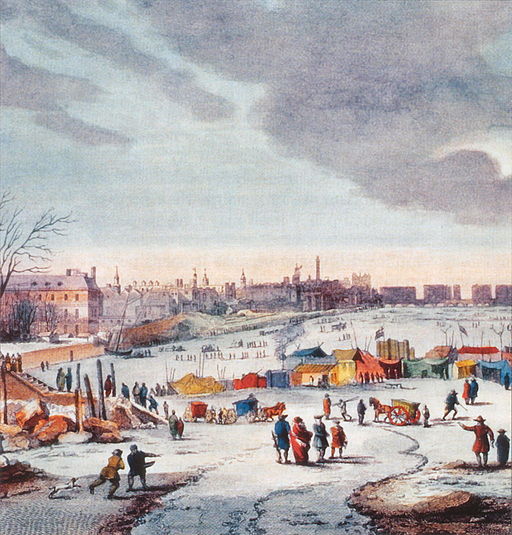 A Collision of Climate in 17th Century Virginia

Virginia has always been considered a place of weather extremes. In a typical year the summers are hot and humid, the winters can be bitterly cold, spring is wet and rainy, though autumn is surprisingly pleasant. Still, the weather in Virginia may have been even more extreme during the early 1600’s as England’s first colonists began to settle along the James River. During this period, the landscape of Virginia was witness to the effects of an ongoing ice age, an extended drought, and possibly the first widespread impacts of human activity on its environment.

Many of the Englishmen who promoted the colonization of the Chesapeake region during the 17th century imagined that the climate would be warm, mild, and fair; much like the areas surrounding the Mediterranean Sea in Europe. This notion was popularized by such academics as Thomas Hariot, who wrote in his 1588 work A Briefe and True Report of the New Found Land of Virginia that the climate was similar to “the South parts of Greece, Italy, and Spaine.” His assertion was supported by colonists such as William Strachey who noted in his work The History of Travel into Virginia Britannia that “the temperature of this country doth well agree with the English constitution.”

In truth, though, the weather patterns the English colonists encountered in Virginia proved far more severe than they had initially expected. Strachey went on to state that “the summer here is hot as in Spain, the winter cold as in France or England” and “sometimes there are great droughts, other times much rain.” Strachey’s observations bore witness to a variety of circumstances impacting the environment of the Chesapeake region during the early 1600’s.

The period from approximately AD 1300 to AD 1750 has been identified by modern scholars as The Little Ice Age. During this era global temperatures are estimated to have dropped by several degrees Fahrenheit, resulting in far cooler temperatures and weather extremes. Many causes for The Little Ice Age have been suggested, including decreased solar activity, changes in the Earth’s axis, and even volcanic activity. Whatever its cause, the impacts of this period of cooling were felt in Virginia where Strachey observed “in the year 1607 was an extraordinary frost in most of Europe, and this frost was found as extreme in Virginia.”

In addition to cold, The Little Ice Age brought drought conditions to Virginia during the early 1600’s. Recent tree ring analysis conducted by climatologists from the University of Arkansas indicates that the years from approximately 1606 to 1612 were very dry in Virginia. This extended period of drought lead to widespread crop failures for both the native population in Virginia as well as the newly arrived English colonists. Additionally, the depleted water table would have allowed the brackish river water around Jamestown to inundate the wells dug by the English colonists, likely explaining much of the sickness and disease which they suffered during the early days of the colony. Another factor which may have exacerbated the weather patterns in Virginia during this era was the effect of human agricultural activity. Shortly after the first colonists landed in Virginia in 1607, the Englishman George Percy noted that they “saw great smokes of fire” and found that the native inhabitants “had been there burning down the grass.” Recent scholarly research indicates that the burning of forest lands throughout the Americas was a common agricultural practice during this period. However, it would also have allowed native Virginians to maintain widespread rangelands for hunting. The colonist Henry Spelman observed that during a large hunt “everyone with a fire stick in their hand, they beset a great thicket round about. Which done, everyone set fire on the rank grass.” This drawing taken from John Smith’s General History of Virginia (1624) is a good example showing the forested land in the background.

It was the emergence of human agricultural activity across the globe, though, that environmental scientist Warren F. Ruddiman attributed to causing climatic events such as The Little Ice Age. The widespread clearing and cultivation of the global landscape by human beings directly contributed to increases in carbon dioxide and methane levels worldwide. Environmental changes such as these very likely had a direct impact on the global climate and resulting weather patterns which were felt not only in 17th century Virginia but across the world.

*The featured image depicts the Thames River completely frozen over, which was very common in the 1600’s.