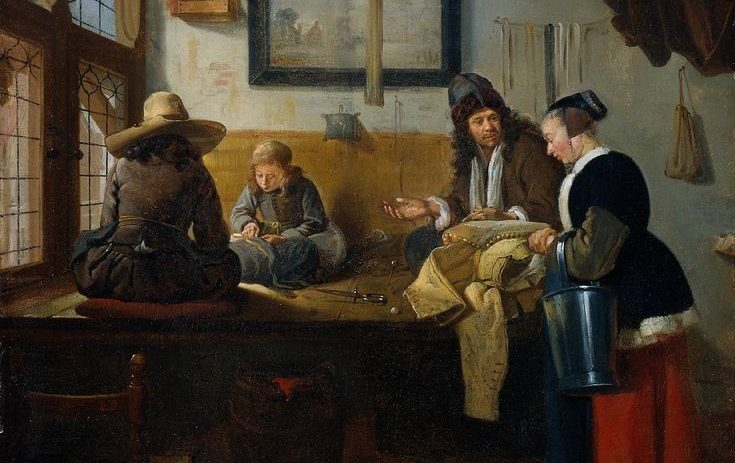 Tailoring was an honorable trade. Being in an organized guild or company in England was no small accomplishment to those that underwent the several years of apprenticeship to become a master of their trade. The average successful tailor in London or other principal cities operated their shop in a rented hall or from their homes. They would often be seen sitting cross legged with their teenage apprentices, stitching garments atop their large cutting tables in the light of large street front windows. By around 1620, a tailor could receive payments of one shilling per day for work. That would routinely give him a modest profit, pay the bills, and feed his apprentices. The crew of them could often make one common garment per day, but perhaps a nicely done doublet in three to four days; it really depended on the finances of the buyer and quality expectations. However, if you were a tailor who was not flourishing, you might have been hired to repair a gentleman’s or farm family’s clothing. Though this was necessary, it was considered lowly work. It may have been some of these men, without an established business, that came to Virginia.

Tailors were present in the English colony of Virginia since the very beginning. Both William Love and John Powell, for example, served as soldiers with Captain John Smith on his early expeditions mapping Virginia and encountering and documenting the Indian communities. Many of these early tailors, though, faded from public record. It was somewhat common for tailors, especially the less prospering ones, to earn money serving against the Spanish during Queen Elizabeth’s reign until King James I made peace with Spain in 1604. Even after the treaty, James I allowed English men to serve under Dutch colors, as the Dutch were still fighting for their independence against the Spanish Empire. Love and Powell were probably two of many soldier-tailors.

Tailors were brought to Virginia as indentured servants, often indebted to the company who hired them for a few years. They took their chances like everyone else with rigorous land clearing, fort building, conflicts with Powhatan Indians, and when summer came after 1612 – working the hot tobacco and crop fields. Tailors who were not also soldiers would most likely wither under the abuses of the colonial workload and combat.

Through the administration and leadership of Sir Thomas Dale (especially when he secured a peace with the Powhatan Chiefdom through the marriage of John Rolfe and Pocahontas), tailors were probably assigned to each new town that Dale established. Cloth was sent to Virginia and tailors were ordered to produce clothing for the people at each settlement, but for no pay, as they were most often indentured servants. Even if they had been released from their contract, if the colony was under martial law the officers could still order tailors to labor for no profit. Was their product as good as in a shop in England? Probably not. Their job was to most often mass-produce suits of clothing for large groups, so one can imagine that without pay and officers yelling for clothing, the garments were probably very basic in quality.

A final thought for tailors is if they wanted to keep at their honorable and ancient trade in Virginia, switch to tobacco planting, or both? Tailors would and could work for payments in tobacco credit.

What would you do if you were the tailor in a tobacco colony?