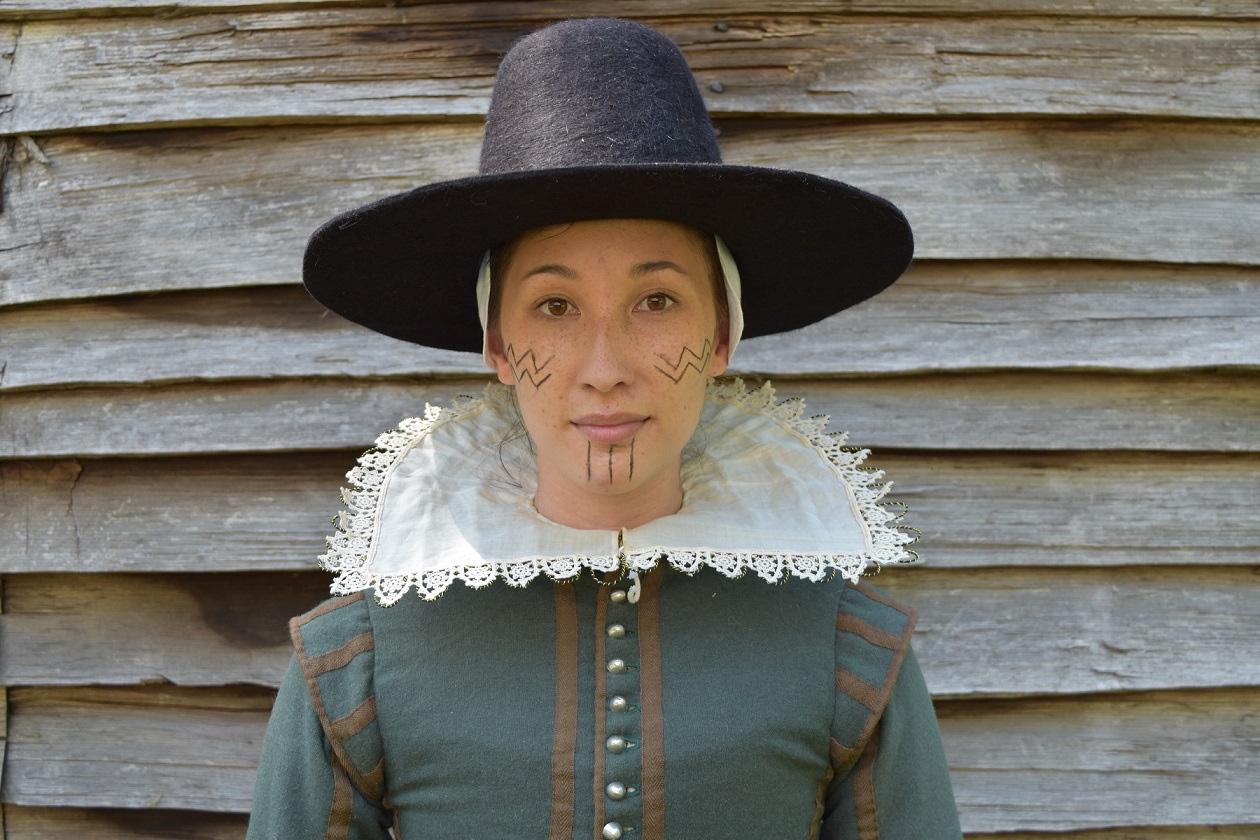 From the summer  of 1613 to March 1614, Pocahontas was under the care and education of the two principal leaders of the upriver “Henryco” community, Reverend Alexander  Whitaker and High Marshal Sir Thomas Dale. This seven-acre fortified town, built in 1611 by Sir Thomas Dale and his 300 or so men, would become a new home for the captive Pocahontas, who most likely was lodged as a guest at Reverend Whitaker’s isolated and fortified parsonage, Rocke Hall.

Dale was keeping both the king’s charter instructions and his own personal faith ambitions by being an evangelical in the Virginia colony. King James I allowed the leadership to bring the word of Christianity when it was practical to do so. It was not to be forced. From his letters, we know that Dale was a hardliner on God, and ultimately would be the first leader to openly endorse conversions and initiated it by 1612.

Dale, being in-charge of law enforcement and military affairs, very well understood that peace could be achieved by possible social and religious intervention and integration. It was purely on him and the position he held.

Captain Samuel Argall brought Pocahontas to Jamestown in the Spring of 1613 and after failing to obtain a ransom for her return, Dale took Pocahontas as his project.  That would bring her to Henryco where Dale had his operations well underway in expanding Virginia.

Pocahontas was not Dale’s first attempt at conversion. The first was an older male Powhatan named Totakins, who Dale had sent to England before the high marshal ever met Pocahontas. The Virginia Company of London failed to keep Totakins alive and well apparently, and Dale was displeased by this. More than likely it, the loss of Totakins in England is what prompted him to keep Pocahontas nearby and eventually into the Christian mentorship of Reverend Alexander Whitaker.

Whitaker was the son of one of the early and leading founders of Calvinist-based Puritan religious ideologies, that being Cambridge’s Doctor of Divinity, William Whitaker. Those various Calvinist-English progressive ideas would have the Virginia colony as an experimental ground for those theological considerations. In that intellectual sense, the Powhatan people would become a great curiosity to Whitaker.

He wrote several lengthy studies discussing the opportunities the English had in order to help the Powhatans’ progress and advance through the word of God. Pocahontas would become the verification for these considerations and objectives.

The young theologian (Whitaker was about 28 when he arrived in Virginia) was fascinated with both the Virginia environs as well as these inhabitants that so many often referred to as “naturals” or “savages.” Whitaker had one seminal statement that he wrote about these Powhatan people and the possibilities of their future among the English. He wrote:

They have reasonable souls and intellectual faculties as well as we. We all have Adam for a common parent. Yea, by nature the condition of us both is all one: the servants of sin and slaves of the devil. Oh, remember, I beseech you, what was the state of England before the Gospel was preached in our country. How much better were we then and concerning our souls’ health than these now are? Let the word of the lord sound out that it may be heard in these parts…But if any of us should misdoubt that this barbarous people is uncapable of such heavenly mysteries, let such men know that they are far mistaken in nature of these men.

It seems fairly-evident from the passage above that Whitaker saw a spiritual kinship with the native people in Virginia. He surely believed that they, as Pagans, had more godly work to do in theological progress, but it was his opinion that the Powhatan people were no different than the English people before Christianity was brought to post-Roman England. By any standard of the time, he was an optimist and an early 17th-century progressive-liberal thinker. Whitaker wanted peace and to help the Powhatan people. Other English may not have shared those sentiments. More importantly, Dale and Whitaker worked together on these objectives.

From the summer of 1613 through March 1614, Pocahontas underwent the educational directions of Whitaker under the supervision of Dale.  She would have been dressed as an English woman, treated with the various courtesies of an English woman, and well-guarded from both the potential rescue by the Powhatan warriors sent by her father (which never happened) and against violations of English men who may have expected more from her than to see to the betterment of her soul. She would have dressed English, been groomed English, eaten and slept English, and prayed English. There is no evidence to suggest that Dale planned an Anglo-Powhatan marriage in those months. It is uncertain when Pocahontas and John Rolfe first met. That documented association would occur on Dale’s March 1614 expedition up the Pamunkey River to confront Powhatan on finishing the options on ransom, exchange, or other options for Pocahontas.

After John Rolfe met Powhatan’s representatives and Pocahontas spoke with her brothers, there was soon after a letter by Rolfe passed between Secretary Ralph Hamor and Sir Thomas Dale. It was a lengthy document offering to marry Powhatan’s daughter for the good of everyone. A month later they would be married and Pocahontas, then baptized as Rebecca, would become Rebecca Rolfe.

It is always going to be questioned what was really addressed in those two conversations – the one led by Pocahontas and the one by Rolfe. Did they advance the idea of marriage before the expedition or was it something that was offered on the spot to stop an escalation of the fighting that was already happening on this expedition?

Was the marriage idea brought by Whitaker, Dale, Powhatan, Rolfe, or Pocahontas, or all of the aforementioned people? We will never know. One thing is certain, Dale and Powhatan would have to authorize it, but Reverend Whitaker would have to justify it and or perform it.  From what we know of the Reverend, he certainly would have considered it a sign of godliness, hope in humanity, and prospects for peace for the Virginia Company of London and the Powhatan Chiefdom.

There is one thing we can be certain of within this uncertain history. Sir Thomas Dale and Reverend Alexander mentored Pocahontas for approximately nine months. That education would be added to the stately or monarchial knowledge she already acquired living amongst the leadership of the Powhatan chiefdom and by the Patawomack people.