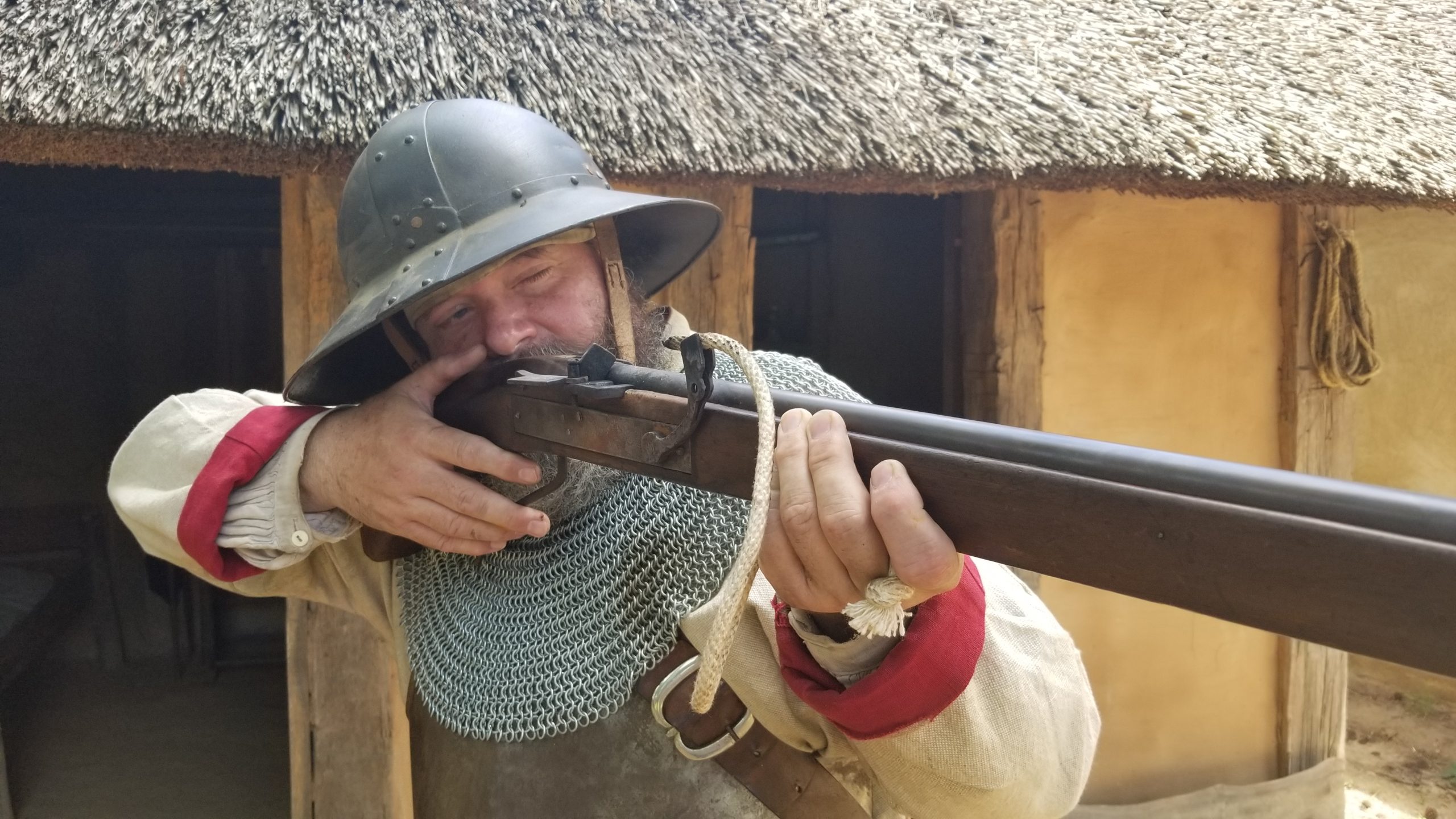 In the early 1600’s when the English arrived in what they named Virginia Britannia, they found themselves in massive forests already home to a sophisticated civilization of warriors – the Powhatan nation. In the clashes to come, the advanced weapons and military tactics so relied upon on the battlefields of Europe did not guarantee English success here in the New World, contrary to what was likely expected. Many of the weapons and much of the armour brought from England or sent by the Virginia Company of London simply did not function the same way here as in Europe, as the English would soon learn. One good example is the pike – then the most common and successful weapon on European battlefields. Ranging from 18 to 22 feet in length and tipped with a sharp, pointed blade, pikes were wielded by block formations of well-trained soldiers – “pikemen” – that made up an enormous part of 17th c. military forces in western Europe. On large, treeless battlefields their effectiveness was unquestioned.  But Virginia at this time was essentially one gigantic forest, and those pike blocks – and the weapon itself –  were impossible to utilize effectively as a result. Neither the weapon nor the tactic translated to the New World, depriving English forces of a previously reliable weapon that was doubtlessly expected to provide a military edge against the numerically superior Powhatans. Another European weapon that was unexpectedly confounded by the immense forests of the New World was the musket. In the early part of the 17th c. pike blocks were being augmented by and then gradually superseded by “shot.” Trained units armed with powerful black powder guns such as muskets were replacing massed pikemen. However, musketeers needed clear lines of fire to be effective, and Virginia’s vast oceans of trees frequently made firing at a distance – one of the great advantages of the musket – impossible.

In addition to these “hardware” failures, the English also had to contend with the unexpected heat and debilitating humidity of the mid-Atlantic region. Consider that a “hot” day in London was about 70 ° F, while 90 -100 ° F is common during a Virginia summer.  Plate armour – largely obsolete in Europe by the early 1600s – was still widely used in the colony as a practical defense against the expertly-aimed, stone-tipped arrows of Powhatan bows, and the effects of Virginia’s excessive humidity and heat on unseasoned soldiers wearing steel cuirasses were often heat stroke, heat exhaustion, and even death. Many soldiers wore heavily padded cloth armour of quilted canvas as a cheaper alternative to steel plate, but this could be disastrous as well, for obvious reasons.

These are only a few of the less obvious but substantive issues the English had to overcome in Virginia Britannia. To learn more about how these challenges were met and overcome, visit Henricus Historical Park and talk to the musketeers in the fort!