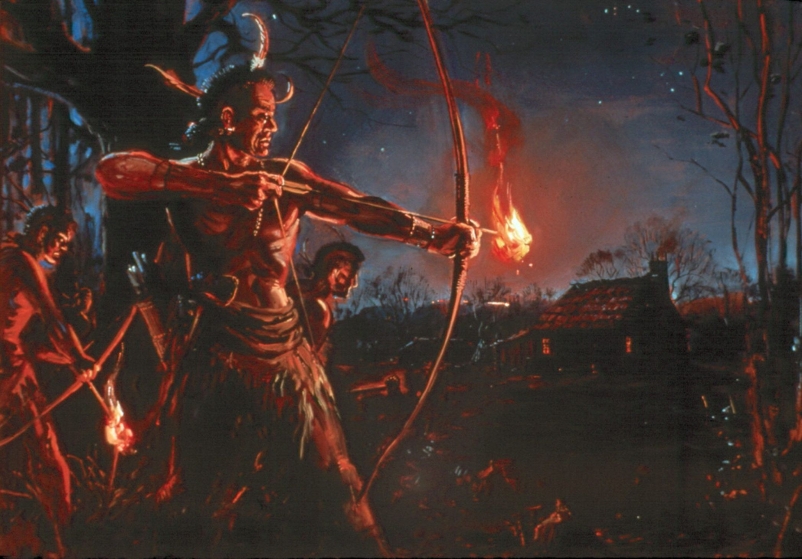 On the morning of March 22, 1622, many of the English colonists spread across the James River region of Virginia were going about their daily business. As the day began, many individuals were preparing their breakfasts, tending to their daily chores, and starting the day’s farm work. They were also likely interacting with many Algonquian Indians from local tribal communities, who came and went freely from the English settlements each day to trade, work, and discuss local affairs.

What followed that fateful day in 1622 drastically upset this quiet pattern of life, shocking the whole of the Virginia colony to its core. As if “at a given signal” (1) Algonquian warriors within and around the various settlements began a concerted series of attacks on almost every settlement simultaneously. Except a very few places such as Jamestown, which had received a forewarning of the attacks only that morning, (2) most colonists across Virginia were struck completely unaware. John Smith noted in a later report the attacks were so sudden “few or none discerned the weapon or blow that brought them to destruction.” (3)

It took some time for the Virginia colonial authorities to comprehend the scope of the what was happening and the destruction which had occurred. Over the days following the attacks, Jamestown began to send patrols up and down river to survey the damage and search for survivors. What they discovered was a grim spectacle. Many settlements such as Martin’s Hundred, Smith’s Hundred, and Henrico had been completely obliterated. Over a quarter of the Virginia colony’s population, 347 (4) out of 1250 people, had been killed. Worse was still to come, as over 400 additional colonists would succumb to malnourishment and disease during the succeeding year, (5) leading to an actual casualty rate resulting from the attacks of over 60% of the colonial population.

The series of attacks carried out that day were part of a masterful plan conceived by the leaders of the Powhatan Chiefdom. Opitchapam and Opechancanough, brothers and successors of the former Powhatan ruler Wahunsenacah (Powhatan), had grown frustrated by years of English expansion along the James River region and an apparent sense of contempt for their people. Colonist George Thorpe had lamented this state of affairs in a 1621 letter writing “there is scarce any man amongst us that doth so much as afford them a good thought in his heart.” (6) As a result, Opitchapam and Opechancanough determined to launch an attack that would set the balance of power in Virginia back in their favor. What they achieved, however, was far more than a series of isolated hit and run attacks. It was a full-scale military offensive.

Opitchapam and Opechancanough had likely been planning this offensive for many months. As early as 1621 they had each taken new names, a typical practice in Powhatan culture reflecting a significant occurrence in one’s life, such as a military conflict. Additionally, during this time a ceremony had occurred following the death of Wahunsenacah for the traditional “taking up” of his bones, which the English later believed Opitchapam and Opechancanough had used as a pretext to gather many tribal leaders to discuss their plans, muster their men, and survey their arms. They also reported that Opechancanough had attempted to obtain quantities of poison from the chief of the Accomac tribe on the Eastern Shore but had been refused. (7) What is clear from these activities, is that the brothers were conducting careful long-term planning for a significant military operation.

Extensive intelligence was also gathered in preparation for the coming offensive. There can be little doubt that many of the local Algonquian Indians who came and went from the various English settlements, and who later participated in the offensive, were ushering information about the state of each settlement to their local chiefs and on up to Opitchapam and Opechancanough. This information would have allowed them to determine the number of warriors needed to strike each settlement, how best to infiltrate or avoid their defenses, and how long an attack was likely to take. John Smith paid a perhaps grudging respect to this intelligence operation noting “In which manner also they slew many of our people at seuerall works in the fields, well knowing in what places and quarters each of our men were, in regard of their familiaritie with us for the effecting that great master-peece of worke.” (8)

Perhaps the most remarkable feat of the Powhatan offensive, however, was the coordination of dozens of surprise attacks up and down the James River region all on the same day. As previously noted, there were some breaches of security, with the Jamestown settlement receiving slight forewarning that morning. Nonetheless, even in our modern era with all its communications advantages, coordinating attacks in a military context is always a challenging prospect. Doing so across scores of miles of terrain, in a time and place where information can only travel as fast as a person can run or paddle a canoe, all while maintaining the element of surprise, seems a truly remarkable feat.

We will likely never know exactly how Opitchapam and Opechancanough were able to coordinate their attacks so precisely or to maintain such secrecy beforehand. However, the success of the 1622 Powhatan Offensive is a clear testament to the military prowess of the Powhatan Chiefdom. From efficient operational planning to careful coordination, organization, communications, intelligence, and the use of highly disciplined warriors, they left nothing to chance in preparing for their offensive. As a result, the Powhatan Chiefdom achieved a decisive, if short lived, military victory over the English colonists of Virginia in the 1622 Offensive.