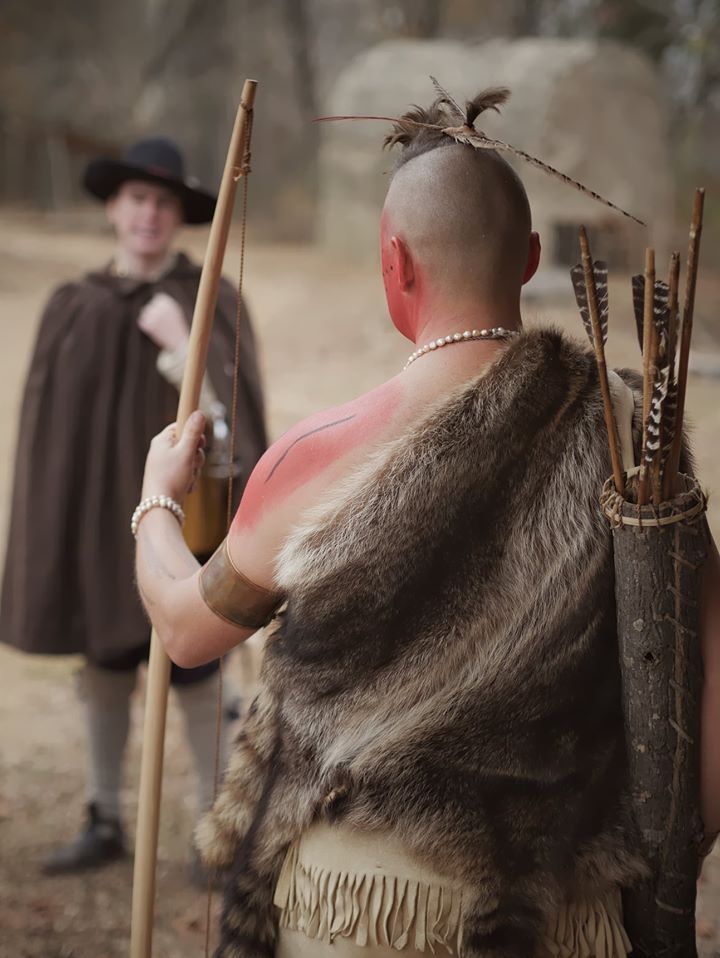 Fashion and Finery in the Powhatan Chiefdom

A variety of descriptions and depictions of Algonquian Indian apparel and attire survive from 17th-century Virginia. Many English colonial accounts from the period simply describe the Algonquian peoples they encountered in Virginia as wearing deerskins around their mid-sections, but otherwise being sparsely clothed. Such perceptions are perhaps understandable in the eyes of English colonists used to being clothed from head to foot in heavy woolen broadcloth. A closer inspection, though, reveals that these descriptions can be misleading.

The Algonquian peoples of 17th century Virginia were highly capable hunters, able to obtain and process animal furs and skins in surplus. Fancis Maguel noted that the Virginia Algonquians he encountered “generally go about dressed in very well-tanned deerskins, as they understand very well how to prepare them.” 1 The choice of attire worn by individuals, though, likely depended more than anything on seasonal weather, personal comfort, and individual preference or expression.

Typical clothing for both Algonquian men and women included either a deerskin apron belted around the waist or a fitted knee length deerskin tunic strapped at the shoulder. Both garments often included decorative elements such as fringed ends and small shells, beads or pieces of copper sewn along the edges. It is likely, however, that the simpler aprons may have been preferred for daily work activities, while the more elaborate tunics may have been worn for more fashionable occasions. Stylish Algonquian women were described by William Strachey as covered “for the most part all over with skin mantles finely dress’d, shagged and fringed at the skirt, carved and colored, with some pretty work or the proportion of beasts, fowl, tortoises, or other suchlike imagery, as shall best please or express the fancy of the wearer.” 2 In the winter months, mantles of deerskin or other animal furs would have been worn for additional warmth.  Chief Wahunsenacah (Powhatan) was described by John Smith as wearing “a great robe made of rarowcun skins, and all the tails hanging by.” 3 Gabriel Archer also noted “in cool weather they wear deerskins with the hair on loose,” 4 a likely description of deerskin cloaks or mantles. Archer’s account went on to describe the wearing of moccasins and leggings, noting “Some have leather stockings up to their twists (upper legs), and sandals on their feet.” 4 Given that Algonquian communities in Virginia were closely tied to the waterways, it is possible that the use of such footwear and legwear may have been reserved for the winter months, while going barefoot may have been more typical on the waterfronts during the warmer months of the year.

Aside from basic clothing, adornment was equally significant to the attire of Virginia Algonquians. The use of jewelry, makeup, and ornamental clothing was widespread at all levels of society. When John Smith was captured by a large hunting party in 1607 he noted that each man had “on his arm a fox or an otter’s skin” and had “their heads and shoulders painted red.” 5 Gabriel Archer’s account of adornment stated “Some have chains of long link’d copper about their necks, and some chains of pearl.” And in their hair “The common sort stick long feathers in this knot.” 6 Perhaps the most colorful example of personal adornment was George Percy’s account of the great warrior Munetute, who was known to the English as “Jack of the Feathers” because he would present himself “all covered over with feathers and swan’s wings fastened unto his shoulders.” 7

Clothing for the Algonquian peoples of Virginia during the 17th century, just as for European colonists of the same era, was as much a matter of form as of function. The attire an individual wore not only protected him or her from the elements, but also served as a statement of fashion, style and personal expression. Wardrobe, jewelry, makeup and accessories all combined to allow individuals to create unique outfits and appearances. It was through these forms of personal apparel that Virginia Algonquian people were able to convey their status, wealth, purpose, and individualism within their wider communities and society.