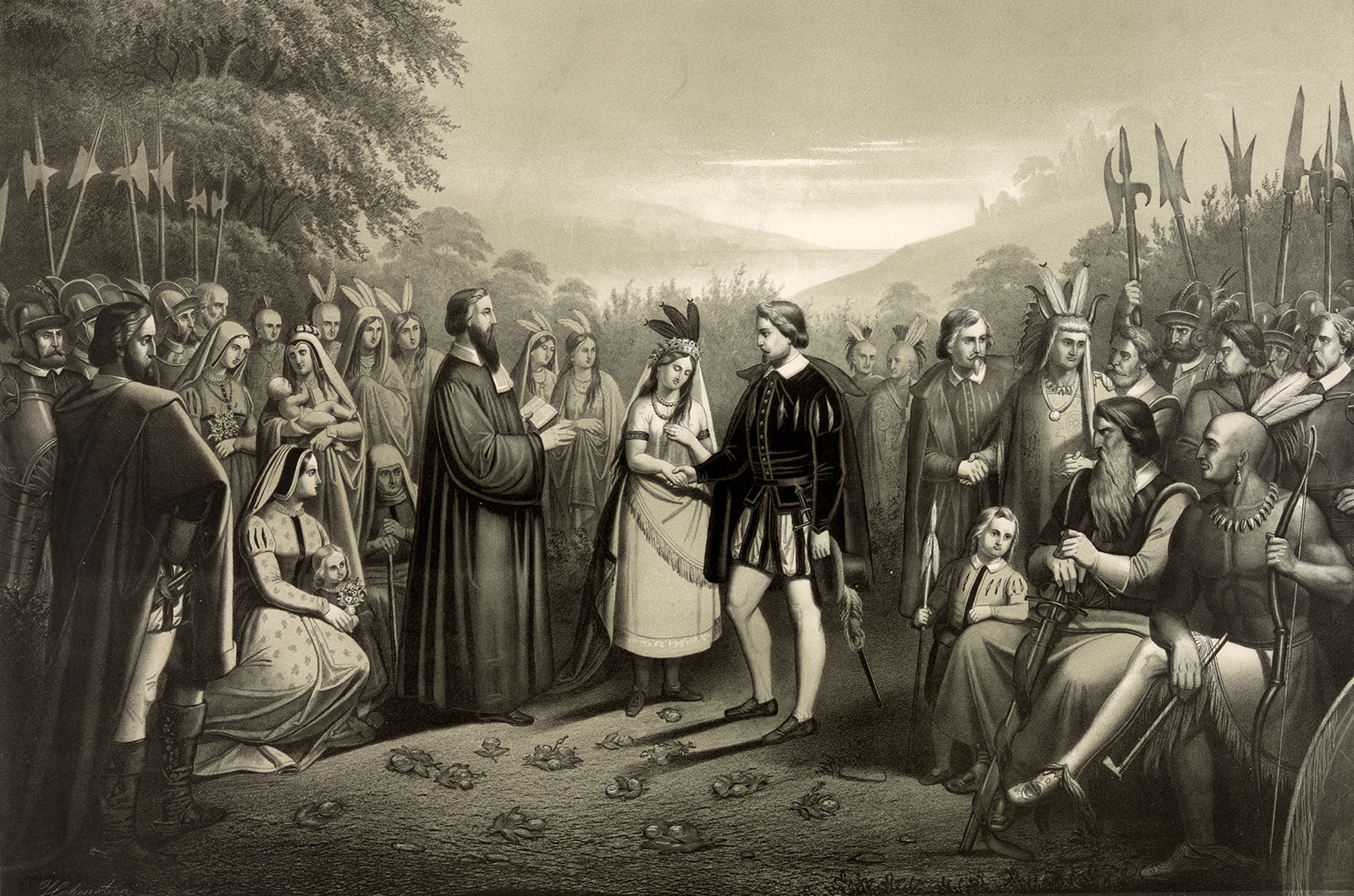 John Rolfe of the Virginia Colony has a fascinating, controversial, and mysterious history from 1610 through 1622. He was born into a prosperous farming and merchant family in Heacham (pronounced hitch-im) near Norfolk, England, northeast of London, and was baptized there at St. Mary’s church on May 3, 1585. His upbringing was typical of a young man in a middling English family. In 1609 he and his pregnant wife would make the arduous voyage to the New World, but   Mother and child would both die when shipwrecked on the island of Bermuda. Upon finally arriving in Virginia, Rolfe's new life and responsibilities would make him a well known figure in the colony's history. In 1612 he pioneered cultivation of highly lucrative Spanish tobacco, which soon flourished and motivated the struggling colonists to expand their gains. His 1614 marriage to Pocahontas resulted in a son - Thomas Rolfe - and ushered in an eight year period of non-aggression between the English and the Powhatans. This peaceful alliance created a greater sense of permanence for the Virginia colony. He later became colonial secretary for the Virginia Company of London, as well as a supervisory port official. Rolfe was witness in 1619 to the arrival of enslaved Africans from a Spanish ship taken at sea by English and Dutch privateers and brought to the colony to exchange for provisions. Finally - and here's the mysterious part - there's his last will and testament. Signed March 10, 1622, this document is the last contemporary mention of John Rolfe, who then vanishes from all public record. There are no accounts of his death, his burial, or any communications to family in England. How is it possible that one of the most influential men in the colony of Virginia could seemingly disappear without a trace?

On a curious side note, of the five key players in the Anglo-Powhatan alliance - Rev. Alexander Whitaker, Chief Powhatan, Sir Thomas Dale, Pocahontas, and John Rolfe - only Pocahontas has a verified burial location: Gravesend, Kent, England. Around the time she died there – March 1617 - Rev. Whitaker drowned in the James River. His burial is strangely undocumented. In 1618 Chief Powhatan died - the location of his burial site remains a mystery. Lastly, Sir Thomas Dale died at sea off the coast of India in August 1619 and *may* be buried in a colonial cemetery there. This left only John Rolfe as the last living member of the alliance.

There’s much to consider:

Halloween Movie Night: The Legend of Sleepy Hollow (all ages)

Things That Go Bump in the Night