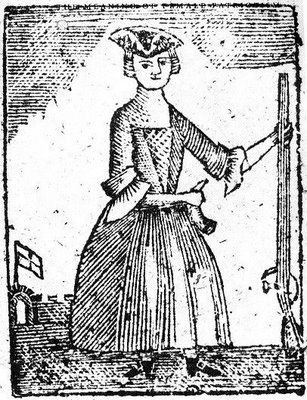 One of the more intriguing couples of the early 1620’s in the Henrico community was John Proctor and his wife, Alice.
John Proctor was from a “yeoman” class family from England. He came to Virginia in 1609-1610 on the Sea Venture, which had wrecked on Bermuda, and eventually made his way with other survivors to Virginia. John was a “freeman” because he paid his way to the colony and had no debt to the Virginia Company. He was deemed an “Ancient Planter,” which made it easy to receive a land grant, and he did so sometime after 1617. His 100-150 acres would be approximately 2 miles from the old fort of “Henryco” at the confluence of the James River and the creek that still today bears their name - Proctor’s Creek.

Like most tobacco-driven planters attempting to make a stay in Virginia, John Proctor sought a wife in a colony of lonely men.

Alice (or Allis) Proctor came to the Virginia colony aboard the George in 1621. Not much is known of her prior to Virginia, but by one account was described as a “proper, civil, and modest gentlewoman.” Whether she was involved in the Virginia Company of London’s so called “bride ships” or tobacco lotteries for wives isn’t clear, she married John in 1622. The Proctors were prosperous enough to have a few indentured servants who were mostly teenagers. On March 22, 1622, the new Powhatan chief Opechancanough led the infamous massacre of English colonists. This brilliant military offensive killed over 300 colonists in one day, but Mistress Proctor would not let the plantation go down without a fight.

For three weeks, Alice led a heroic defense against the ongoing Powhatan attacks until she was forcibly removed by militia with orders from Governor Wyatt to relocate survivors downriver.

Where was John Proctor during these attacks? It is possible that he was in England as records show he had built up a debt developing his plantation. John reunited with his wife at "Paces Paines," a community selected for new land grants for planters who were removed from the Henrico communities. John, by some accounts, assisted heavily in the rebuilding of Virginia and sat on various committees. It seems as if he did come back from England with new funding, but what happened next for the couple?

John and Alice Proctor would face epic legal struggles. It was alleged that John beat his teenage boy servant to death with a yard rake and that Alice ordered her other servants to brutality whip Elizabeth Abbot, her maid servant, who eventually died from infected wounds. There was lengthy testimony, but John was acquitted on self-defense and Alice on the technicalities of laws surrounding the whippings. John Proctor died in 1627 and Alice took over his holdings in Virginia.